One of the most unique designs you'll find anywhere, the Chaos Pebbles tank bib is all freehand tooled on a single layer of Hermann Oak 7oz. saddlery leather so each bib is like a fingerprint, no two are the same!

The smooth center bar can be black or brown to allow for more matching options.  Black hand braided edges finish it off. Tank bibs have a felt backing to protect your paint.

This bib is specifically for the pe-1997 models that use the catch bar at the top rather than the holes for the post-1997 introduction of bib nipples on the console bottom.

Pair your Chaos Pebbles tank bib with a matching fender bib and bags for a full custom look! https://threemuttscustoms.com/products/the-original-chaos-pebbles-fender-bib

I recently bought an 08 Superglide in the anniversary copper color and decided that brown seats and bags were the way to go. My one hangup was the black tank bib, which clashed horribly with my new mustang brown diamond stitched seat. After a bit of googling, I found Three Mutts and reached out to Chris asking if he could do an inverted curve dyna bib in mustang matching (not available as a standard option on the site). He was very accommodating and seemed genuinely enthusiastic about doing the work, as he said this would be the first of its kind. I finally hooked it up today and it fit perfectly and looks awesome. He even gave me some free pointers in case I decide to yank the anniversary coin off the old bib and transfer it to the new one. Excellent craftsmanship and customer service. I hope to do business with him again in the future.

really finishes off the bike when I ride with the solo seat . protects the fender as any bib would , but looks fantastic and custom !

I ordered the diamond stitch tank bib. It's perfect match with my diamond stitch seat. Very clean and awesome communication with the three mutts customs.

Chris did an awesome job , exactly what I was looking for 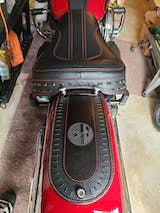