There are multiple options for design with the plain, embroidery or diamond stitching so please scroll through the photos and drop down box.

DUE TO COVID RELATED MATERIAL DELAYS, WE ARE ACCEPTING NEW ORDERS HOWEVER SHIPPING TIMES MAY BE 4-5 WEEKS

Order started out on a good note. I was contacted almost immediately to confirm the year of my bike. I was also quoted a time frame at that point. It came and went. I allowed the time frame on the web site to pass as well before I contacted 3 Mutts. My order shipped the night I contacted him. Wrong tank bib was sent, chalked up to a misunderstanding of wording on the web site, and the one I expected to receive was sent immediately. It looks great. Fender bib, on the other hand, came with holes that didn't line up. With some time, elbow grease, and an exacto knife, I was able to get the bib to sit flat in the center, but the edges still flare up. It did its job and protected the fender on the bike trip I went on right after its arrival. I‘ll continue to use it for that purpose, but won’t be keeping it on the bike like i originally planned, though. 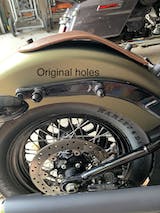 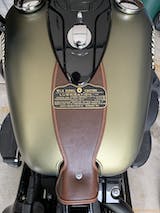 Hello J, Sorry your experience wasn't 5 stars, my fault. We had discussed the delay and tank bib via email and sorted that out. I was not aware the fender bib sent was incorrect, sad to see an otherwise good bib modified but nonetheless I'm sending a new one tomorrow so you have one you can keep on the bike as planned. -Chris
V
V.W.
Great Quality

You never really know what you’re going to get when ordering in-line. The reviews were great so I gave it a shot. I was so impressed by the quality workmanship, I’m proud to have this company’s work on my bike!! 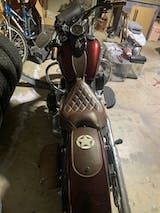 Great bibs, high quality, they look great matched up with my mustang seat. Thank you

My tank bib and fender bib are awesome. The customer service is just as good. Would buy from these guys again for sure. 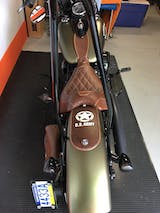 Back to Custom Tank Bibs
★ Our Reviews

The fender bib adds a great touch to the HD CVO. Looks good with excellent craftsmanship.
Thanks Chris👍🏽 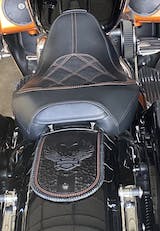 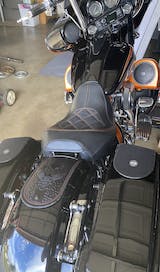 The fit is fantastic. The color match is perfect. Shipping was faster than I expected. I couldn’t be any more pleased with my bib!!

Incredible, much better than anticipated and I had high expectations. Craftmanship is outstanding!

Very happy with the fender bib. Chris did a great job. My customizations were done exactly as requested. Quick and friendly custom service.

I love it. Great work and great folks to deal with. Chris was very helpful providing the information I needed to make a purchase.

I'll buy more from these guys in days to come!